About this time last year, we all watched anxiously as Hurricane Harvey came crashing ashore along the Gulf Coast. Many of us prayed for our friends, neighbors, and family members who were scattered along the Gulf, bravely facing the immediate blow and the subsequent weeks of devastating floods. Eighty-eight Texans lost their lives.

Texas took a tough hit but didn’t even stagger. It could have been so much worse.

Good Bourbon for a Good Cause

This was when Garrison Brothers Distillery first reached out to The Bourbon Brotherhood (and Sisterhood) to raise money for Team Rubicon’s disaster relief efforts. We announced that in 2021 – four years from the day Harvey hit – we would give 1,000 bottles of Hurricane Tough bourbon to those who contributed $100 or more.

And boy did you crazy sons-of-guns give!

We received 1,169 contributions totaling more than $142,000 IN JUST 72 HOURS! Our distribution partner, Republic National Distributing Company, wanting to help, matched funds for every bottle of Boot Flask that was sold and kicked in another $2,268 bringing the grand total to $144,468.

If you were a donor, don’t worry, we have your contact information and we will let you know in a few years when your bourbon is bottled.  In the meantime, don’t change your email address! 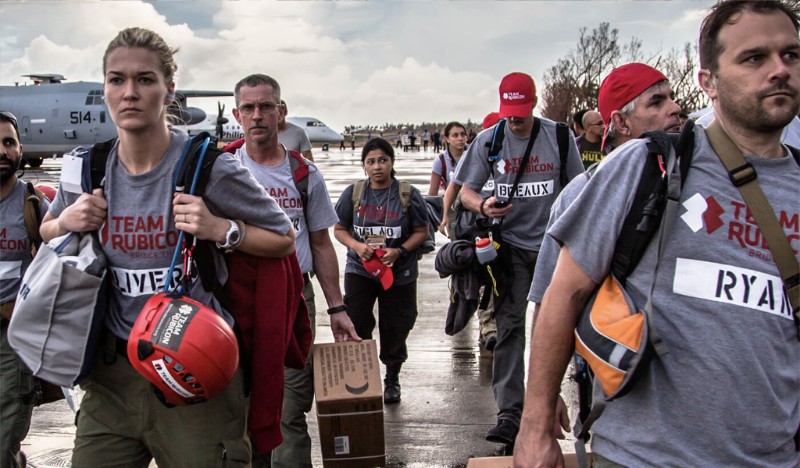 Team Rubicon is a 501(c)3 nonprofit that unites the skills and experiences of military veterans with first responders to rapidly deploy emergency response teams. Founded in 2010, Team Rubicon has deployed across the United States and around the world to provide immediate relief to those impacted by disasters and humanitarian crises. Since their founding, they’ve responded to 288 disasters and have grown from 8 to 80,000 volunteers.

At Garrison Brothers, we think that’s a pretty badass mission.

Even a year later, the recovery efforts are far from complete. Go visit Port A and you’ll see what we mean. Most people don’t realize Team Rubicon remains stationed in Houston, helping Texans impacted by Hurricane Harvey rebuild their homes and their lives. But they’re also in Puerto Rico cleaning up, helping stabilize local communities and rebuilding roofs after Hurricane Maria, and they’ve got volunteer members fighting wildfires in California. Planet Earth is providing plenty of catastrophic reasons to keep these guys and girls in business.

The Hurricane Harvey fundraising effort was our first interaction with Team Rubicon and we were simply awed by their bravery and operational efficiency. The $144,000 we contributed went to food, fuel, travel and rental trucks for the 12 outposts Team Rubicon manned during the disaster.

So, we’re going put our money where our mouth is to support this operation. One Year Later:  How to Keep Helping

From now until Team Rubicon’s Salute to Service Awards on November 1, 2018, we are going to donate $1 for every bottle of Garrison Brothers Boot Flask Bourbon that is sold in Texas to Team Rubicon.  Additionally, we will introduce the 2018 Release of Garrison Brothers Cowboy Bourbon on September 21. We will donate $5 for every bottle of Cowboy Bourbon that is sold between now and November 1, 2018. There is no cap on this matching fund challenge; the more you buy, the more we will give.

Might be a good time to stock your bar. If you’re not a bourbon drinker, you can always donate directly to Team Rubicon at this link.

We are also working with many of our restaurant, bar and retail partners to multiply the fundraising. We will have more news about this effort soon. In the meantime, please help us help Team Rubicon continue the life-altering work they perform.

Good bourbon can change the world!